Urgent Action Alert on Board Bill 203!

Contact Lewis Reed, President of the St. Louis City Board of Alderman, ask him not to take up BB 203 for a vote! 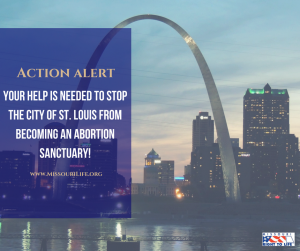 Your help is needed to oppose Board Bill 203, a proposed ordinance in the City of St. Louis that attacks and threatens the deeply held moral and religious convictions of the people of St. Louis by seeking to make St. Louis a “sanctuary city” for abortion!

BB 203 attempts to force Churches and others to be complicit in the profound evil of abortion. The President of the St. Louis City Board of Aldermen, Lewis Reed, needs to hear from you that you oppose making St. Louis an abortion sanctuary.

BB 203 would force employers and landlords to hire and rent to people who publically support abortion, or face charges of discrimination. The language of the bill is ambiguous, but it could have profound and troubling consequences for religious institutions.

Because this ordinance, in effect, requires religious organizations to support abortion rights and advocacy, there can be no room for compromise. BB 203 must be withdrawn or defeated.

The St. Louis City Board of Aldermen have their last meeting tomorrow, February 10, 2017, before they adjourn for an election cycle and a new session beginning in April. Contact President Lewis Reed and ask him not to take up BB 203 for a vote during their meeting tomorrow morning.

Even after offices close you can send the following email message:

Please do not take up BB 203 for a vote tomorrow!  Do not let St. Louis become an abortion sanctuary city!

Forward this to anyone you know in St. Louis City or St. Louis County.  Those outside St. Louis can let them know that you will not support businesses and other events in the City of St Louis if it becomes a sanctuary city for abortion.